The Horse and the Infant

in The Horse and the Infant

TESTO - Jorge Rivera-Herrans - The Horse and the Infant 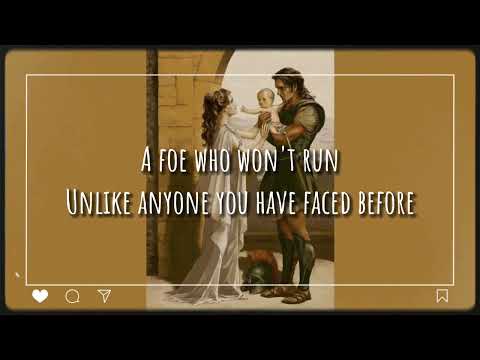 TESTO - Jorge Rivera-Herrans - The Horse and the Infant

SOLDIERS]
Alright my brothers listen closely
Tonight we make the Trojans pay
Ten years of war they killed us slowly
But now we'll be the one's who slay
Think of your wives and your children
Your family's wonder where you've been
They're growing old and yet you're still here
Do what I say and you'll see them again
Yes sir!
Diomedes will lead the charge
Agamemnon will flank the guards
Meneleus will let our mates through the gates to take the whole city at large
Teucer will shoot any ambush attack
And Little Ajax will stay back
Nestor, secure Helen and protect her
Neo, avenge your father, kill the brothers of Hector!
Yes sir!
Find that inner strength now
Use that well of pride
Fight though every pain now
Ask yourself inside
What do you live for?
What do you try for?
What do you wish for?
What do you fight for?

A vision of what is to come, can not be outrun, can only be dealt with right here and now

I don't think you're ready
A mission to kill someone's son, a foe who won't run, unlike anyone you have faced before

Say no more, I know that I'm ready

I don't think you're ready

It's just an infant, it's just a boy, what sort of imminent threat does he pose that I can not avoid?

This is the son of none other than Troy's very own prince Hector, know that he will grow from a boy to an avenger
One fuelled with rage as you're consumed with age
If you don't end him now you'll have no one left to save
You can say goodbye to
Penelope, you can say goodbye to Penelope
I could raise him as my own He will burn your house and throneOr send him far away from home He'll find you wherever you goMake sure his past is never known The gods will make it known
I'd rather bleed for ya, down on my knees for ya He's bringing you down on your knees for ya
I'm begging please
Oh, this is the will of the gods
Please don't make me do this, don't make me do this

The blood on your hands is something you won't lose

All you can choose is whose