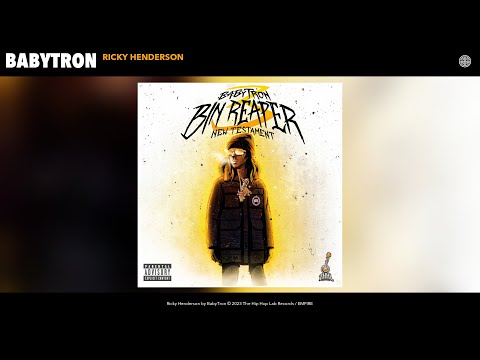 Lil' brodie stealing everything, Ricky Henderson (Go do your research, you gotta learn sum' 'fore you listen)
I'll fuck around and push that button, have the blicky blender him
Five thousand dollar fit, that's fifty Benjamins

Really connected to the plug, your shit be rendering
Dog $hit Militia, unky in his Dickies selling it
Periodic table in the kitchen, sixty elements
Let me see an opp, gon' lose control like Missy Elliot (Boom)
I'm in that G-Wagon (Skrrt)
G-O-D, if I see twelve, I'ma keep stabbing (Skrrt)
Why you acting like a vet'? You ain't seen action
I ain't dealing with the fishy shit, won't even eat salmon (Goddamn)
Since he capping, we gon' put three in his hat like Chance the Rapper
I don't think yo team could get a victory, yo mans a slacker
Retired 201s, I'm walking in to cash them bastards
Twelve terabytes, I baked a pie, I'm a Apple jacker
In high school you thought you had life figured out
But now you just an average Joe, you took the five figure route
It's 2022, it's time to throw the Swishers out
Land shopping out in Texas, I might need a bigger house
All these motherfucking Track .2s, I could write a book
Lil' brodie, he ain't got no wheels, he finna slide on foot
Fly as hell, fuck what's underneath me, I'm too high to look
Had to pat him down for a wire, he acting like the hook
Spin the block and pop his top like a corkscrew
A killer on the 'Gram but he be singing in the courtroom (Man)
All I'm missing is a saddle, we done horsed you
Bandana patches wrapped around my jeans, it ain't no horse shoes
Sipping out a baby bottle, all I'm missing is a pacifier
Sipping Wocky' in October, look like apple cider
I got a pistol with a glitch, this bitch shoot rapid fire
I wouldn't run, the scope on it came with a magnifier
Scrape up the extras, I'm a maximizer
The skid mapped out in my head, shit, I'm a strategizer (Yeah)
How I make it to Kentucky when the tags expired?
I fucked around and burnt my fingers rolling out a bag of fire
Paid a hunnid fifty for some turbo, this a Taycan (Porsche)
If you seen us shake hands, we prolly made bands
I'm ten toes in my Ian Connor's, boy, these ain't Vans (Nah)
What I'm dropping in my pop, it look like grape jam
Shit, I just bought a thousand (Shh)
I can't even tell you what, I just thought about it (Brrt)
I lock my lips then lose the key, can't even talk about it (Brrt)
I don't think that's real Virgil, something off about it (Ha, Brrt)
Kansas City chief, I'm dropping red into my Baja Gold
Your lifestyle amateur like, shit, you not a pro
On stage with the baby Drac', ready to rock and roll (Brrt)
So much drip up in my closet, walk in like, "Geronimo"
Turn his Lamb' into a stretch, limousine style
I'm mixing RPs with my lean, feeling mean now
Why you playing? Got the reaper up on speed dial
Smoking za, it's like a comic strip when I breathe out
Get the rebound (Yeah), throw it down court
If you really 'bout it, what you staying in the house for?
2023, my goal, stress less and count more
Why the fuck you worry 'bout my bag? I hope you found yours
(Man, ShittyBoyz, Dog $hit Militia, you know what the fuck going on)
(They can't stop us, I think we undefeated at this point, this shit is getting too fucking easy, yeah)

Lil' brodie stealing everything, Ricky Henderson (Go do your research, you gotta learn sum' 'fore you listen)
I'll fuck around and push that button, have the blicky blender him
Five thousand dollar fit, that's fifty Benjamins

First name Himothy, last name Bitch
It could be a traffic jam, bet I wouldn't lane switch
(Basically if you ain't on gang shit, you lame, bitch)
(Yo life might be good but it ain't this)
(ShittyBoyz, Dog $hit Militia, man)