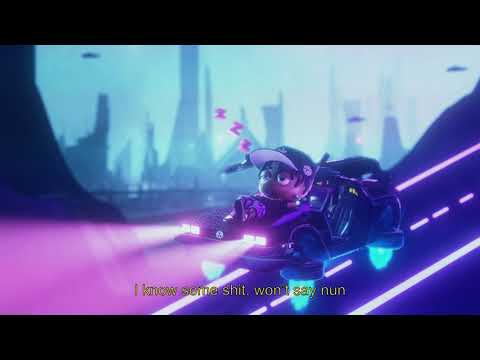 It's Great John beats, baby
Great John on the beat, by the way

Right now I'm hurtin', so I can't show love
Buggin' off them drugs, I might run off on the plug
I ain't never do no drill off no pill, I was sober
If they catch me lackin', told them, "Make sure that it's over"
Make sure that it's—
Make sure that it's lit
On the internet he tough, but out in person he a bitch
No, she thought I was the shit
Now shawty say I'm lit
If it ain't 'bout no money, don't be callin' me for shit
Iced out even when the lights out
I'm so high, you could see my cloud
Nigga, I ain't really hearin' what you sayin' right now
Nigga, I ain't really playin' right now
Red beam, nigga I ain't gotta aim right now
But it's okay
Wouldn't let me fuck back then, said, "No way"
Now she see I pull up, black Benz on the freeway
Now she see I'm up, she be actin' like she need, Sleep, huh
Runnin' to that money 'til my knees weak
I just slut two ho's, that's a three piece
She said she wan' marry me, I said I love the streets
Can't let momma bury me, I'm ridin' with my heat
You don't know what I came from
Just 'cause he day one, don't mean he day one
I know some shit, won't say none
I might just play dumb, you know I'm A1, ayy
Lil' bad bitch from the Valley-O
Too freak, let me fuck her on the patio
She know my name, but she still call me daddy-O
You know the game, I don't play it, I just know the controls, ayy
You know the saying, better pay what you owe
Back then money short, I was prayin' it grow, ayy
You'll prolly never feel the pain in my soul
So I'm tryna put the pain in my songs
I be this way 'til I'm gone
Still I ride with it
Gotta survive, I can't die living
Tell the truth, why you lie? Ain't no smiles in it
My demons cry, and I forgive 'em, ayy
I'm better off on my lonely
Less chance a nigga switchin' up on me
I know shit's sad, but you gotta watch homies
They don't understand, real niggas only, ayy
Birthdays was the worst days
Now we, sip lean when we thirsty, ayy
I put some ice where my heart stay
How that black boy shine in a dark place? Ayy
I'm not nice enough, ayy
My bread pilin' up, my fit stylin' tucked
I don't smile enough
I don't smile enough, ayy