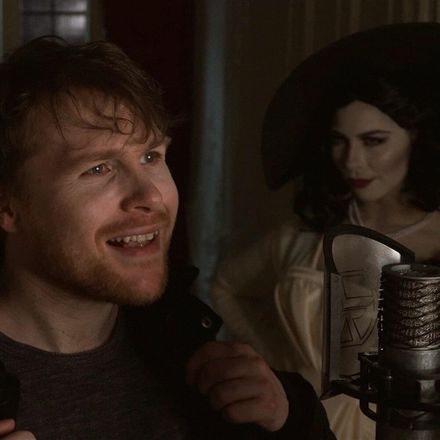 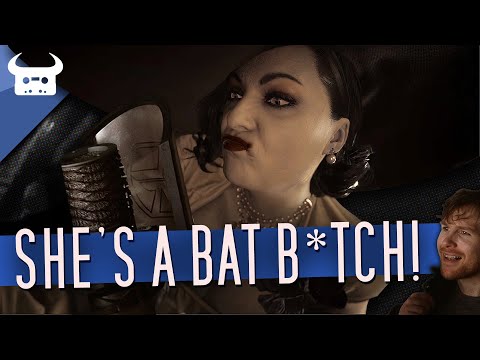 Yes dude, shall I commence? I think it's best to
Let me begin introducing my special guest, who
Could it be? Bet you can guess who
Try once, twice, three times, a Lady Dimitrescu
Uh, bat bitch, Lady Dimitrescu
Neither mortal born nor made in a test tube
Don't take her for a dame in distress who's waiting for rescue
Doesn't dress to impress, but to oppress you
You're feeling chest pain, she's in a vex mood
It's a chess game and the Queen's waiting for your next movе
Sexually fetishise hеr, she may just have to hex you
Shove you straight through the doorway into the next room
Just 'cause you're a skeptic doesn't make it any less true
But maybe you'll get it with your face under her left boot
Doesn't favour the flavour of fresh fruit
She'd rather savour the taste of your neck juice
So put on your best suit and favourite dress shoes
And have a little skank to that Romanian death fugue
Pay the blood banker you're remaining in debt to
Then get wasted in the way only the dead do

I'm a bad bitch, hit the kitchen, make a sandwich
And while you're at it grab a can from the damn fridge
It's thirsty work, bloody rapping like a bandage
Cracking out the chrysalis and becoming a bad bitch
I speak for the sad kids, the disadvantaged
Nobody listens to as if it was a different language
Uh, look what I've become, should call me mother tongue
Sweet cheeks until I bust like bubble gum
Bubble butt, purple yoghurt, chuckle brother troublesome
They'll be looking for you under the rubble, but um
Your death is just the beginning of what you'll suffer from
I'll tell you more once you mix us another double rum

I'm a bad bitch as we've established
Holy as a prophylactic that's wrapped over a cactus
I wrote my phone digits on moses' stone tablets
God didn't make me, I gave Adam a cracked rib
Snap dicks like a matchstick, that quick
I hit the wood in ways Chaplin could never slapstick
A mad lass with a fat ass that lacks flatness
I'm sat on top of two globes, you pack an atlas
Gluteus Maximus, booty is blasphemous
Routinely clapping at you heathen bachelors
'Til even cat lovers feel the need to smash the puss
To even catch a buzz, take a seat, you're passengers
In back of hearse where that perverse Dragula's
About to bus, you back to your manufacturer
Snatch your fluids like the thatcher years
The bad bitch is so statuesque, it's fucking fabulous

Don't your mother raise you up better than to shame a slut?
That's dangerous, you may get more than just a paper cut, mate, what?
I'm making sure your grave is dug, shaded among the gladed wood
Your family's memories of you fade under the clay and mud
I'm celebrating supping maiden's blood like a good lady should
Woop, there goes the neighbourhood blood
We're really just religious villagers who are generally relishing
Reliving religion that's merely irrelevant because see
We're all sinners as soon as the law's seen us
As sinister, all innocence isn't at all similar
Within us a raw cynicism is summoned up
There isn't a synonym for it in the thesaurus to sum it up
You say potato, I say Potarter
You stay stigmatized, I stake stigmata
Sticking this big boy into your sigmoid
The bigger the stick is the sicker the Sig Freud
Lipstick is quite good at concealed congealed lifeblood
Licking the shit off my lips as if it was a spice rub
Your throat's a nightclub at night, it opens right up
Why you so surprised? Check the size of my incisors
These canines will straight slide inside you
Sliced up like the Snyder cut, Rabies Survivor
You're riding life bareback, my Lady Godiva
So watch it, my lines are fibre optic, you're dial-up
I'm throttling your glottis 'til there's not a bit of bandwidth
So I'm sorry, man, you're never going to see your grandkids
I'm a bad bitch, Lily Samad Savage
A queen's speech, even Lady Leshurr meets her match with
I sleep six feet above my mattress
So meeting me between the sheets would be disastrous
A freakily good beast on the beat, don't even need practice
People in the streets are beating their meat to this bat bitch

Heard word, there was a vacancy
Vlad the Impaler seemed unavailable, so the fabled vocation went straight to me
I create sensations, degrading what the brain perceives
That invade your daydreams, shaking you awake from sleep
Replace your faith with an ancient need to mate and bleed
So wait and see just how pleasurable pain can be
And there isn't a wall I couldn't haul you right through
Stepping all on your nether regions like a Kaiju
Pillage a Village until it's in a list on rightmove
Of least appealing villages to live in if you like you
These medieval deadly deeds will bury people very deep
You'll rarely see or tell if she's more Meryl Streep or barely legal
With scary teeth more than semi-lethal or any needle
Never repelling the Evil, whatever you plea for we will
Leave your prayer contaminated like Canterbury Cathedral
I'm telling you people you're not ready for a sequel