Mary and the Soldier 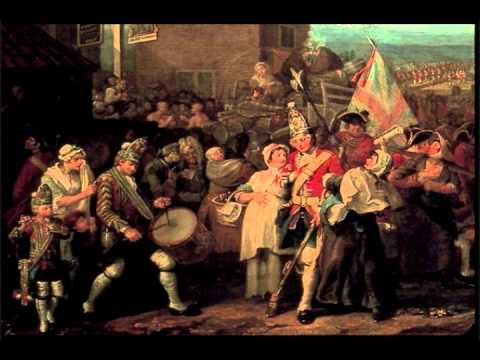 Come all you lads of high renown
That would hear of a fair young maiden
And she roved out on a summer's day
For to view the soldiers paradin'
They marched so bold and they looked so gay
Their colors flyin' and the bands did play
And it caused young Mary for to say
"I'll wed you my gallant soldier."

She viewed the soldiers on parade
And as they stood at their leisure
Mary to herself did say
"At last I've found my treasure."
"But oh, how cruel my parents must be
Banishing my true love so far from me
Well I'll leave them all and I'll go with thee
My bold undaunted soldier."

"Oh Mary dear, your parents' love
I pray don't be unruly
For when you're in a foreign land
Believe me you'll rue surely
Perhaps in battle I might fall
From a shot from an angry cannonball
And you so far from your daddy's hall
Be advised by a gallant soldier."

"If I have fifty guineas in bright gold
Likewise a heart that's blunder
And I'd leave them all and I'll go with you
My bold undaunted soldier
So don't say no but let me go
And I will face the daring foe
We'll march together to and fro
I'll wed you my gallant soldier."

And when he saw her loyalty
And Mary so true-hearted
He said, "My darling, married we'll be
And nothin' but death will part us
And when we're in some foreign land
I'll guard you, darling, with my right hand
Hopes that God might stand a friend
To Mary and her gallant soldier."