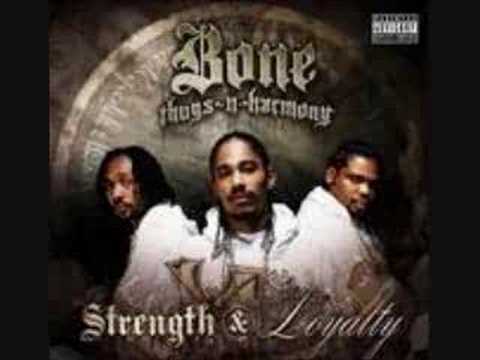 With the heater, 9 mil-limeter {*echoes*}

Nigga get ready for the big payback
Been thuggin and keepin it gully since way back
Lot of niggas been talkin, they runnin they mouths barkin
Runnin around false, they claimin they wanna run with the rawest
My record is flawless, my method is lawless
I'm a automatic weapon nigga you just a target
The number one artist from the +Land of Tha Heartless+
Fin' to get ya, hit ya nigga they couldn't call it
One nigga left and they talkin 'bout we ain't happenin
So we had to give that up and make 'em recognize platinum
Look at everybody rappin just like I'm rappin
Niggas gotta admit it that Bone Thugs is the master
They die... and there's no competition (no competition)
Tear the roof off the motherfucker
I put a boot off in a motherfucker's ass, still down to blast
Or clash with any one of you niggas who start
We ain't trippin off of none of you niggas (whoo)
Leatherface the boy is back
With a little bit of action bring it, rap it, sing it
Bust it, whatever dawg
Whatever y'all wanna do I'm with it, wicked (wicked)

Mmmmmm I done had a mil', took a mil', blew a mil'
Still in the streets, that's how I live (I live)
It don't mean a damn thing
Still got a little change, believe me comin in (in)
Shit I pass a nigga, seen a lot of niggas point him out
Point him out, "That's him here"
It's about to be easy with a big cast eat him up, send him on his way
Kick him in his ass, have a nice DAY
Went the wrong way, got a lot to say
It can get so murderous, murderous
Touchin us never that, Bone Thugs still the crack
Crack and I can't lay back on the comeback
Spit on these niggas, spit on these niggas
Round up any of you niggas, any of you niggas
Won't be no recognizin niggas
Just one warnin impatient, one time only okay?
Don't repeat myself, bad for my health
Don't wanna do that, rather spray
Catch me on the wrong day, catch me on the wrong day
Better stay out my way, better stay out my face
That's the last thing you wanna do, Thugs true
Sing the blues, I shoot at you now you move

Y'all know how I feel about fake niggas
Bitch niggas, snitch niggas, ain't no love for them
Put a nigga in his place, momma cryin at the wake
That's right, that's what a nigga does for them
I play above the rim (I play above the rim)
With no lames in my circle cause I love to win
With the real ass niggas with the Thug in them
And if you talk too much I put a slug in them
Oh no, don't play with him Lay, gon' get him
If Wish don't get him then Kray gon' get him
Straight up, we spit 'em
With a 9 on my side and I slide to the rhythm
Let me slow it down
In case you didn't catch my drift
Lift a nigga up out his shoes
Trigger finger not hesitant
Fuck it... let me speed it up
Hit him like the ammunition comin from my heater
Y'all niggas can't see these Thugs
Seventeen shots from the 9-millimeter
On the creep with the night vision
Infrared beams pointed at your dome
Can't wait to see a nigga response
When I rip that vest with the teflon teflon