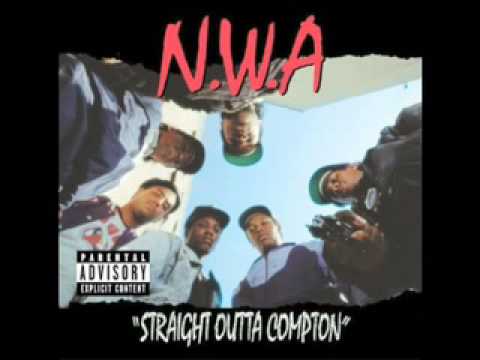 I don't drink brass monkey, like the beat funky
Nickname Eazy-E, yo' 8 ball junkie
Bass drum kicking to show my shit
Rapper holdin' my dick, boy, I don't quit
And if ain't rap, then you know it's crap
Crowd rocking sucka stomper from around the way
I got a six-shooter, yo, mean I'm brave
E rolling out, to find the Boyz
To kick dust and cuss, crank up some noise
Police on my tail, I d'ont like jail
40 ounce in my lap and and it's cold as hell
Hook a right turn and let the boys go past
Then I say to myself, they can kiss my ass
Hip to get drunk got the eight in my lips
Put in the old tape Marvin Gaye's greatest hits
Turn the shit up had the bass cold whomping
Cruising through the Eastside, South of Compton
See a big ass, and I say word
I took a look at her face, and the bitch was to the curb
But she was on my tip for the title I'm holding
Eazy-E's getting busy got the 8-ball rolling

I, was...cold kicking ass
I, was...raised in L.A
I, was...cruising down the street in my six-four
Too much posse

Olde English 800, because that's my brand
Take it in a bottle, forty, quart or can
Drink it like a madman, yes I do
Fuck the police and a 502
Stepped in the party, I was drunk as hell
Three bitches already said, " Eric yo' breath smells! "
40 ounce in hand that's what I got
Yo man you see Eazy hurlin in the parkin lot
Stepped on your foot cold dissed your hoe
Asked her to dance and she said, hell no
Called her a bitch because that's the rule
Boyz-n-the hood trying to keep me cool
Tell my homeboy you wanna kick my butt
I walked in your face and we get em up
I started dropping the dogs, and watch you fold
Just dumb full of cum got knocked out cold
"Make you look sick you snotty nosed prick!
Now your fly bitches all over his dick!"
Punk got dropped cause the title I'm holding
Eazy-E's fucked up and got the 8 ball rolling